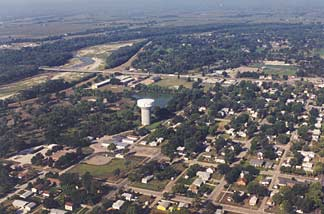 Early in 1856, several citizens of Columbus, Ohio, dreamed of a bold business venture: the establishment of a town along the route of the proposed transcontinental railway. By March they had formed the "Columbus Town Company".

The group included Jacob Louis, Frederick Gottschalk, Carl Reinke, Michael Smith, Jacob Guter, John Wolfel, Vincent Kummer, Henry Lusche, Charles Bremer, John Browner, J. P. Becker, Anthony Voll, and John Held. They arrived on the evening of May 29, 1856, from Omaha by ox team. Believing the logical choice for a railroad would be in the wide, flat Platte Valley that stretched from the Missouri River to the mountains, they chose to locate their town at the confluence of the Loup and Platte rivers in the Nebraska Territory. The particular location of the townsite had a two-fold purpose….the region promised excellent land for raising crops and the site selected was convenient for establishing a ferry across the fast moving Loup River. Using trees from along the Loup River, they built a log cabin with a thatched roof. This served as a home for the colony until other houses could be built.

When more pioneers arrived in the new town, a sawmill, grist mill, and a brewery sprang up. The well-established village was an easy choice for county seat when the area north of the Platte was organized.

The "choice location" not only placed Columbus on the main line of the Union Pacific Railroad, but later as a hub for branch lines such as the Atchison and Nebraska from Lincoln, and the Omaha, Niobrara and Black Hills to Norfolk.

Buffalo Bill was a frequent visitor to Columbus, being a good friend of the North Brothers. The North Brothers were known for their military service and overseeing the famous group of native Americans known as the Pawnee Scouts. The scouts were renowned for the assistance they provided the American Government during its westward expansion. Buffalo Bill so enjoyed Columbus that it was the site for the first full dress rehearsal of Buffalo Bill's Wild West Show. The wild west extravaganza formally opened in Omaha a couple days later. 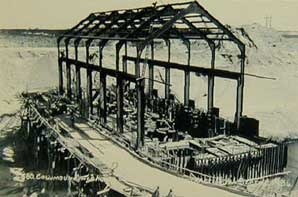 With the adoption of the automobile as the preferred method of transportation, the cry "take Nebraska out of the mud" resulted in paving the old Mormon Trail / Lincoln Highway (U.S. 30) and the Meridian Highway (U.S. 81) making Columbus the "crossroads of the nation." Bridges over the rivers were improved and a viaduct was built across the busy U.P. tracks.

By 1910, Columbus had a population of 5,000, a sizeable number of inhabitants for those days. It was a strong commercial point for goods going west. The town's next big growth spurt came in the mid part of the century when the Columbus economy became three pronged: industry, agriculture, and power.

During the dust, drought, and blight days of the 1930's, Columbus leaders revived the earlier dream of harnessing water power to generate electricity. They worked countless months to convince the federal government to allocate $3 million from the Reconstruction Finance Corporation to construct the power canal.

Their foresight was considerable, especially in light of the fact that the demand for electricity in the early 1930's was small. The construction of the project helped to alleviate local unemployment by providing jobs in the midst of the Great Depression. Water diverted from the Loup River into a canal continues today to produce hydro-electric power. Because of the Loup Project, Columbus was the birthplace of public power in Nebraska.

In the mid-1940's, catering to both agricultural and industrial interests, several Columbus men-of-vision created an industrial site and constructed a speculative industrial building. Having this building available led our first out of town corporation to look at Columbus and eventually settle here, although not in the speculative building. We believe this to be the first designated industrial site in the U.S. The company was Becton-Dickinson and they now employ over 1,550 people in Columbus. Many Columbus manufacturing businesses such as Behlen Manufacturing Company and Dale Products (now Vishay Dale Electronics) came from small beginnings in garages and out-buildings. Today Columbus is the most highly industrial city per capita in the state of Nebraska with manufacturing providing employment to over 5,700 people.

From these 16 adventurous people with dreams, vision, and courage, Columbus has grown to a diversified community of 22,000.